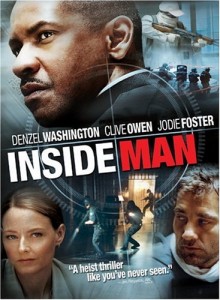 It should be said pretty quickly off the mark: this is a very slick movie. Framed by smooth credits and a clunking (if not slightly inappropriate) Panjabi PC soundtrack, Spike Lee’s latest offering casts Denzel Washington as Keith Frazier, a deputy detective who happens to be standing in charge when Clive Owen’s band of elite criminals hold up a Manhattan bank, trying to pull off the world’s most perfect bank robbery.

It must be said that this is not you average cop thriller. For one, Washington is cast as a surprisingly affable detective, avoiding the usual pitfall of playing either a good or bad cop. He’s simply a nice guy who loves his girl, and his partner is equally as charming and smiley as he is. Frazier’s methodology of dealing with Owen as the troupe ringleader is also surprisingly amiable, and not without its charms. Owen, meanwhile, is pedantic and calculated to the point of being chilling and plays his part with a degree of phlegmatism that is nonetheless thoroughly intense and convincing.

As with most cop movies, the plot suffers from being just a tad over-scripted but luckily enough restrains itself from descending into a farcical string of plot twists and over-choreographed surprises. It must also be said that the climax is too indistinct and overdrawn to be compelling, but still leaves a satisfaction of a job well done. Inside Man, therefore, is the type of movie that you’ll probably watch every time it’s on Sky Movies – not a masterpiece, but a piece of cinema for which Spike Lee would be justifiably proud.