The singular beauty of football, the reason it’s known worldwide as The Beautiful Game, is the sheer simplicity of the sport. Gary Lineker once famously quipped that football “is a simple game; 22 men chase a ball for 90 minutes and at the end, the Germans win.” While the ultimate outcome might not be quite that predictable – and certainly Everton, Manchester City, Tottenham and Aston Villa will be doing their best to disprove it this year, with inevitable mixed success – the overall sentiment is a true one. Football is a global language, an art of beauty as simple or complicated as one might wish to make it. Put two sets of toddlers together and a goal at either end and without instruction, they’ll immediately spurt into soccer mode, toddling (literally) in swarms after a ball.

Put a batch of middle-aged Chilean men and a group of disaffected Russian urbanite teenagers into the same patch of grass and they might have nothing in common – no language, no shared values, no frames of reference by which to communicate – but throw a size 5 ball into the pot and no further instruction is needed. Without briefing, goalkeepers will be designated, general (though blurry) formations assigned, and there’ll be no quibbling about the rules. Have a quick look at the latter stages of the video for Three Lions [1] to witness a perfect illustration. In the 21st century, people might struggle to relate to each other as the world gets closer together but grows spiritually apart, but put a group on a pitch and they’ll at least understand the offside rule.

Of course, adding to this is the global reach of television, perhaps the only similar art form with a parallel global reach. The same analogy about univeralism applies: my Dad often tells me a story about how he and Mum were on holiday somewhere in Italy during the 1982 World Cup, and how he and another Irishman he met were out walking when West Germany met France in the semi-final. Anxious to see how the game was going (both men were accompanying their fiancées out shopping), they peered over the wall of a private compound where a local was watching the game in his garden. Being spotted by the owner, and fearing a clash with the local Polizia, they scarpered – only for the man to chase them down and invite them into the garden for a few beers to watch the rest of the game, forever immortalised by Harald Schumacher leaving Patrick Battiston unconscious [2] and without several teeth later in the game. (This, again, all took place without the man speaking English or without my father having even a few words of basic conversational Italian.) 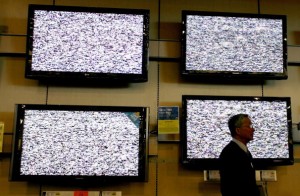 I digress. Back to the power of television. There’s probably very few of the younger football-following population of this giant football we call Earth who didn’t get their first exposure to the game through television. It has a reach simply incalculable and impossible to exceed. Put the world’s most universal game onto the world’s most universal medium and you have a profound, immense and unstoppable captivation. But yet, amongst all of this, in the third millennium with moneybags footballers and worldwide support for the biggest leagues, we’re seeing a shift away of this, primarily in England, where the power of the remote control is being slowly slugged away.

Let me explain. If you travel to France, Germany, Spain or indeed anywhere else in the world, while you might have to get hold of a pay-per-view channel (or two) to watch the domestic leagues, you’ll at least be assured that when the goals are flying in on a Saturday or Sunday afternoon, you’ll be able to see them live. Not so in England, where – under the pretences of maining the physical crowds at games – there’s a formalised Saturday 3pm blackout, and the closest you’ll get to the action is Jeff Stelling doing a live link to Chris Kamara. Don’t get me wrong, Jeff and Chris are brilliant, but it’s not quite the same as getting to see the full action live.

The rationale for this, an idea when Sky showed up in time for the Premier League in 1992, was that if there was too much television coverage of 3pm games on a Saturday, it would entice people who otherwise might have attended games in person to stay at home and watch them on TV instead. A fair point at the time – in the aftermath of Hillsborough, with waning public interest and the danger of football’s financial arse falling out from under it, it was a necessary step. With hyped-up overexposure the game could genuinely have died on its feet. But with the rampant explosion of wealth that followed – admittedly, largely at Sky’s hands – is there really a merit to such a blackout any more?

The Premiership has gotten its bedrock together now, it’s crowds aren’t going to suffer, and so the rationale descends to the lower leagues. If the Premiership was on TV, it itself might be safe, but what about the lower leagues? So enter the BBC with their free-to-air Championship coverage. What logic of safeguarding attendances of matches when the pick of its games are available to all and sundry? What’s left? The FA Cup? There’s no logic of trying to safeguard 3pm attendances there because it’s not as if it’s an ongoing worry as a tournament. The tournament won’t suffer if there’s a medium-interest game aired at 3pm – if the TV networks really believed their own hype about the romance of the tournament, then airing the games would surely only give a greater platform to it. As it is, the only Saturday game aired at 3pm is the FA Cup final.

Premiership clubs, as I mentioned in my last opinion piece [3], are debt-leveraged to the hilt by now, and need to keep cranking up their ticket prices to keep their ships afloat – but yet, with a guaranteed attendance base for these games, they risk squeezing out the everyday family unit from the game. Restoring 3pm coverage, even if it was pay-per-view, is a real chance for English football to get back into the mainstream consciousness of those in society who haven’t yet drank the Kool-aid.

It says a lot that in the next international TV package, the Premier League are going to reallocate their Chinese rights [4] and ensure that one in ten games is carried on free-to-air television. Maybe they’re overlooking the uncracked market sitting in front of their noses: the one still in England, where fans are finding the universal game less and less universal.