Gav Reilly argues for reform of the League Cup before it becomes an unworkable, worthless shambles – but what do you think?

The draw for the quarter-finals [1] of the Carling Cup was released this morning; the world kept turning.

A quick history lesson: the League Cup was instituted in 1960-61 as a tournament specifically created to abuse the newly-installed floodlights in the grounds of league clubs up and down the country. (While the bigger clubs – most notably Manchester United – had had lights installed in the mid-1950s, so as to take part in European midweek competition, other clubs followed suit at the turn of the decade.) The notion was to hold a mid-week only tournament, abusing the newfound ability of clubs to host games during the darker winter evenings.

Bigger clubs weren’t having it. European competition was still a runner for most of them and it was only when the prize of a UEFA Cup spot was thrown in for the winners that big clubs wanted to do it. Even from the off, the bigger teams needed a bribe to get in.

While it’s easy to say that the Carling Cup has gotten predictable – the Uniteds and Arsenals of the world will put out their young lads until they make the last four, while the absence of any real romance to the competition will stop smaller teams from genuinely believing – and moreover, carrying out – any major acts of giant-killing. This year the quarter-finalists are all from the Premiership – including three of the Big Four as well as this year’s new league upstarts from Man City and Tottenham – crucifying the notion that the competition still offers any chance for a smaller time to reach the big time, get a day out, and find a spot in Europe. 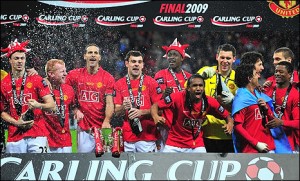 It’s not as if offering a spot in Europe is a particular pre-requisite that the Football League need to work out of their systems. Only England and France offer a European spot to the winners of their secondary cup competitions; the Copa del Rey or the Ligapokal don’t offer their winners anything other than a pot of silverware. In essence, being consistently dominated by teams who already have their European entry guaranteed by league performance, the League Cup has become this.

But, instead of abandoning the tournament (an idea that would have much support), the Carling Cup would be of far better use if it was to be another chance for smaller, non-European-bound teams to have their chance.

So here’s an idea. There are only 92 teams in the tournament in the first place, with a skewed system seeding teams in European competition in further rounds. How about excluding teams already taking part in European competition that year? What good is the tournament if it becomes another chance for Arsene Wenger or Rafa Benitez to win a trophy and keep people off their backs, when a slightly smaller club (even a mid-table Premiership outfit like West Ham) could benefit so much more?

This isn’t so much an opinion piece as an open call for a debate on how to make the competition work. Is there a future for the League Cup? Is it perfect as it is, or how could it be made better?